Another early alarm before work. It is quite noticeable that the spring weather is on its way as dawn was not far away at 0530! Mars and Saturn made a splendid sight against a dark blue pre-dawn sky positioned either side of Antares, with a last quarter moon nearby. Jupiter was shining through the nearby tree but is now too low to observe in the morning sky.

Mars has noticeably increased in size since I last observed this wonderful planet. A number of smaller features are becoming visible despite the small aperture. As before, the image with the UV-IR cut filter was atrocious but not too bad with the 685nm IR pass filter. As can be seen, Syrtis Major was particularly prominent with a lighter patch to the south on the border with Mare Tyrrherum. Hellas was very bright and I have also picked up the smaller features, Nodus Alcyonius and the Hyblaeus Extension.  Not long until May! 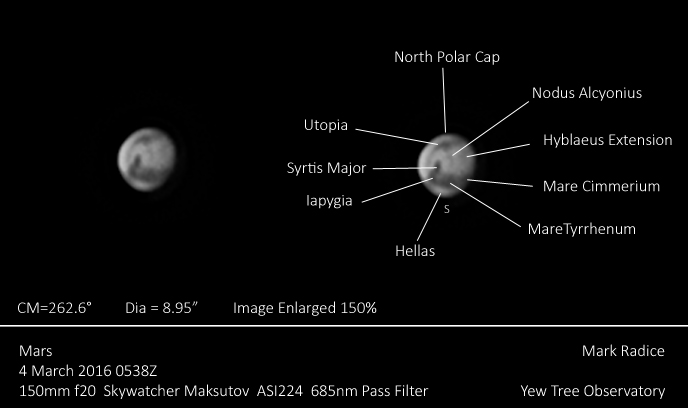 Saturn was another welcome sight. By the time I had it in the eyepiece of the flip-mirror, most of the stars had disappeared in the blue of dawn. The rings and the atmospheric bands are clearly visible although I find it never has the features of Mars or Jupiter. 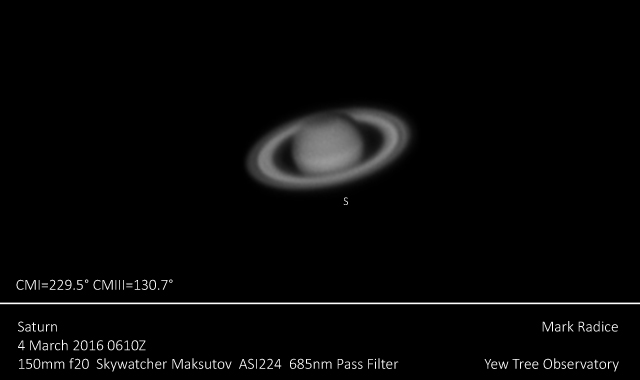 Once I had finished in the outer solar system, I swung over to the more nearby lunar surface. It was really suffering in the murky seeing. Noticeable on the limb was Mare Orientale, a huge impact basin that is only visible occasionally when libration allows. Although the picture is pretty rubbish, the view through the eyepiece was stunning with the concentric rings of the Rook and Cordillera mountains. It is always fun exploring the lunar surface but even more so when unusual and temporal features like this are on show. 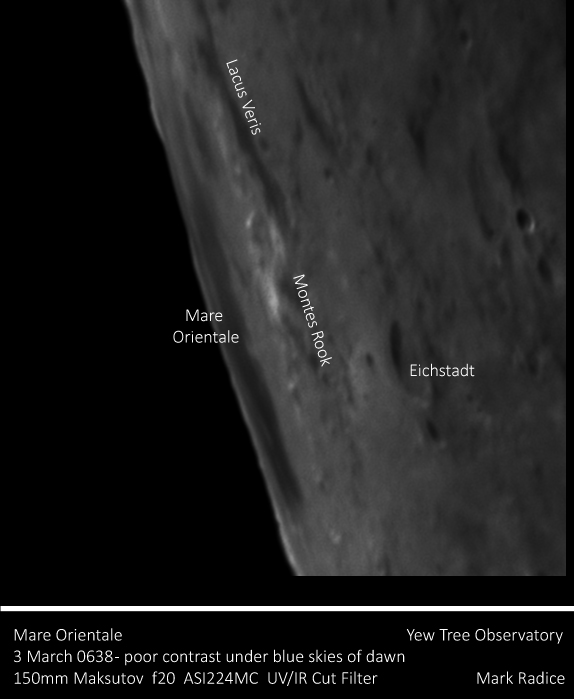 It was then time to pack up, grab breakfast and head to work. What better way to start the day than a tour through the solar system.