I bought a second hand 150mm f12 Skywatcher Mak last week.  This lovely scope will be my new travel scope now I am weekend commuting for a few months.  It is a step up from my 4″ refractor and, with its longer focal length, will excel on my primary interest of the planets and the moon. It’s easy to fit in the back of the car and works really well on top of the ZEQ25 that I bought with my solar scope. As you can imagine, now I have a new telescope (albeit second hand) the weather has turned awful.  I have waited over a week to use it – other than slewing the telescope back and forth on its mount in the sitting room.   Having recently seen the beautiful triple conjunction of Venus, Mars and Jupiter in the morning sky I really want to turn the Mak on them.   Wow, three planets, all together.  Wonderful!

The morning of Thursday 12 November was forecast to be clear.  Even though it was a work day, I set an alarm for 0500.  It seemed to go off far too early but I leapt out of bed to check the sky.  There was Orion looking back at me from a clear sky.  I hurriedly got dressed and started setting up outside.   By 0530 I was ready to go.  The mount was tracking, I had a near-half phase Venus in the eyepiece and the laptop and ASI camera were on. As I was looking at Venus, it seemed to be losing contrast.  I looked up to see a wall of mist and fog slowly working its way across the clear black sky slowly dimming the stars away until only Jupiter and Venus remained visible like faint candles behind a net gauze.  I finished my hot tea, wishing the mist away.  By the time I finished, even Venus was barely visible. I reluctantly packed away and went back to bed until my work alarm clock went off all too soon.

The morning of Friday 13 November was also forecast to be clear.  Again, it was a work day but I was prepared to tolerate this. I spent the evening getting everything ready and once again setting my hated alarm. I was greeted by a clear sky once again and hurriedly set up.  Perhaps I could beat the morning mist again if I was quick?  I needn’t have worried.  The sky remained clear as I caught each of the planets in turn.  Dazzling Venus, so bright I had to turn the camera settings to a minimum to avoid over-exposing the picture.  Jupiter was showing its usual dynamic surface features and, most exciting for me, tiny, tiny Mars.  As we are months from opposition, Mars is only 4.4 arc seconds across! It was like looking at a pea on the other side of the room.  I hope I managed to capture some Martian features.  It was so small (certainly compared to Venus and Jupiter) that its disc didn’t show anything on the laptop screen. 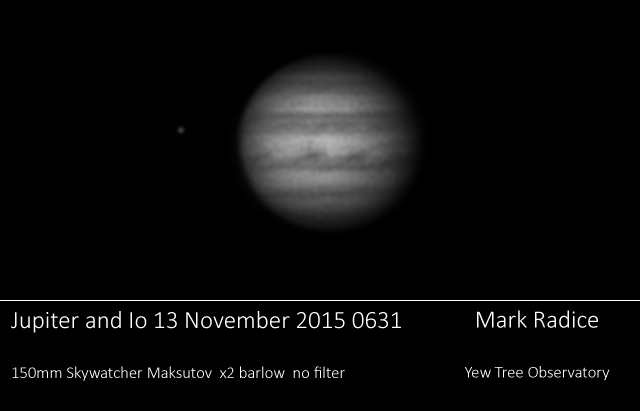 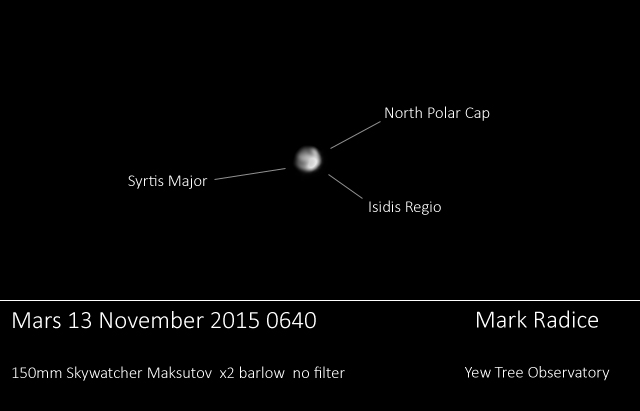 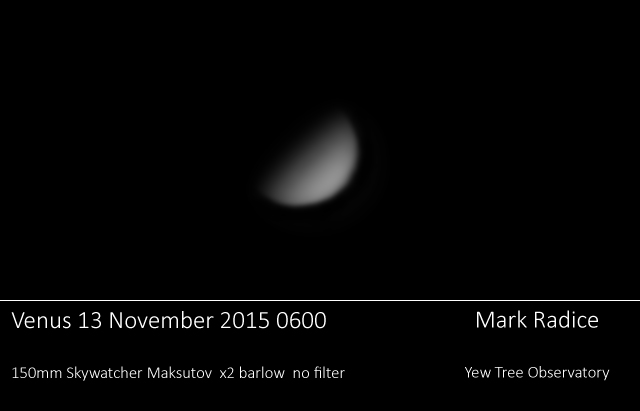 I must admit to having a certain element of excitement.  This is my best ever Mars image simply because it is my first image of Mars.  I only bought my camera last year (again second hand) long after Mars was lost behind the glare of the sun. I thoroughly enjoyed observing Mars in 2014. There is a something wonderfully exciting about observing the deserts of Mars from a garden in southern England. As per my normal practice, I took several video captures of each planet, carefully checking the focus and histogram each time.  The seeing varied from absolutely awful interspersed with moments of clarity. I reluctantly stopped at 0700.  Not only did I need to get ready for work, the planets were slowly losing contrast against a bright blue sky!

I got to work after a quick breakfast buzzing with excitement.  I told my immediate desk neighbours who wondered why anyone would choose to get up at 0500!  I can’t understand why anyone would not want to see a crescent Venus, storms on Jupiter and the deserts of Mars before a day in the office. I feel though, that it’s going to be a long day as, not only will I put in a full day, I have a 2.5h drive home to look forward to this evening. I wonder if it will be clear again tomorrow morning?  I hope so as it’s a Saturday so I can go straight to bed afterwards.