Over the past few weeks, I have been watching Venus and Jupiter close in on each other. Each evening, Venus climbs higher into the night sky, shining like a beacon against the pale blue sky. Jupiter shining at a respectable mag-2, but appearing much dimmer in contrast with Venus, is descending as it prepares to disappear behind the sun. This is, of course, a chance alignment. The planets remain millions of miles apart locked in their orbits but appear on a common line of sight from our earthly viewpoint. Jupiter remains in the far depths of the solar system whereas Venus remains steadfast between us and the sun.

A conjunction between the two brightest planets is an excellent opportunity for widefield photography. I am not a deep sky imager but do enjoy recording sky scenes. It is a real pleasure to catch these sights on camera and enjoy them for posterity.

The evening of 19 June was lovely and clear. The sun set leaving a dark blue sky and the last of the day’s cumulus clouds. Venus and Jupiter were shining above the nearby treeline while overhead the house martins chittered as they searched for insects and an occasional swift raced through. The young, crescent moon was very low so I had to run across the street to find a good vantage point without roofs and wires in the field of view. The stock lens at its widest setting was used to catch the view below. This was about 2200 ish and the sky was not even dark! 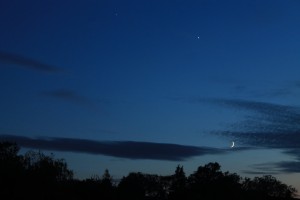 Moon, Venus and Jupiter on 19 June

The evening of 20 June was the real highlight as the crescent joined the planets. As can be expected with anything astronomical, the weather was very poor. Thick cloud covered the sky all day with a small chance of clear skies later in the evening. To my astonishment, the clouds did part at 2100 to reveal a 5-day crescent moon with Venus and Jupiter in close attendance. I rushed outside with the camera and tripod. The scene below was recorded with a 70mm lens from the garden – no need to run down the street this time!

While I was outside enjoying the view, the western horizon was growing black as a huge wall of cloud raced in. The sky was completely overcast in a matter of minutes as a few spots of rain fell. It was a lucky gap in the cloud after all! 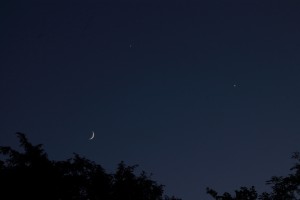 Moon, Venus and Jupiter on 20 June 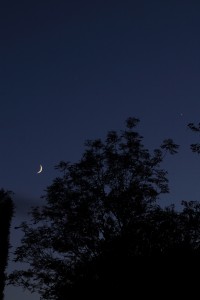 The conjunction around a tree

I couldn’t help noticing this date. The summer solstice, of course, falls on the 20 June. At least that means we can start looking forward to darker skies. In the meantime, Venus and Jupiter will continue to close in on each other. This pirouette will culminate on the night of 30 June – 1 July as they pass within a gnat’s whisker of each other before separating once again. This will be a fine sight in the telescope eyepiece and camera lens so fingers crossed for another clear night.