I helped at an outreach event at the Winchester Science Centre last month. This saw the Centre’s planetarium staying open late while us-volunteers showed the visitors the views through our telescopes. The poor weather moved us indoors where we used our telescopes to admire the many rivets that hold the roof together and the dusty spiderwebs that decorated the darker crevices of the roof corners.

Another volunteer, Richard Fleet, had a laptop showing an amazing set of solar flare timelapses – see them here. When the visitor numbers died down, I asked him how he achieved such fantastic results. In summary, he captured continuous footage at a relatively slow 10fps using Firecapture and then processed them after they had been broken into 30s chunks using Virtual Dub. Catching a lower number, but less grainy, continuous stream of frames eased the hardware requirements and processing efforts. Furthermore a moving timelapse is more tolerant of imperfections that would be noticeable in a static image.

I tried this process on Jupiter on the morning of 4 December from 0620 to 0650 with my new-to-me 150mm Maksutov. The scope had been exploring the moon for an hour so I knew it was at or near thermal equilibrium. When I was going through the video sequence afterwards, it didn’t take me long to realise that the seeing was horrible, except for a brief period when Ganymede appeared from behind the Jovian limb. The earlier frames in the sequence are awful while the frames later in the sequence are awful! They are so bad that I didn’t bother stitching them together to make a timelapse of Jupiter’s rotation. I clipped 2 minutes of video to make the picture below. 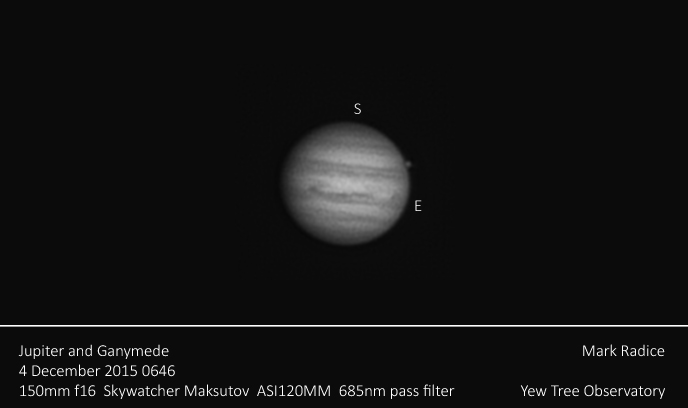 So how does one make use of this lesson? It shows that seeing it the kingpin of any attempt at high resolution imaging. The skies above us will tell us when we are going to get good images. The kit and techniques help but the environment is the limiting factor. I guess that’s why they spend so much money on orbiting telescopes.

I observe as and when I can from my back garden and simply tolerate whatever conditions I am given. I enjoyed fabulous (visual) observations of the planets at the Florida star party in 2014 and 2015. The air could be so steady it was like looking at a Voyager photograph. While I would love to observe from a still, tropical island but that will have to wait to another life-chapter. In the meantime, it validates my approach of making a number of captures in the hope of capturing at least one moment of good seeing.

In the meantime, my attempt at making a Jovian timelapse will have to wait. I still only have the one made last year with my 14“.